Motto of the Corps: Delectamentum creatio ex nihilo (Delicious Creation Out of Nothing)

Welcome to the Corps, Greenling. You're about to join the rowdiest, warmest, and daring...est Chefs in all the lands. I’m sure you’ve heard the stories of the Corps, but in case you’ve been living your entire life with your head in a soup pot, I’ll run you through the basics…

In Combat Chef Corps you will take on the role of a Combat Chef, someone tasked with defending the Townships safe and well-fed. Part warrior, part culinary wiz, you'll be attempting daring expeditions, gathering ingredients from the local Critters, and feeding hungry mouths, all in service to the Sovereign!

Combat Chef Corps has a lot of food elements, including harvesting ingredients from animal or animal-like creatures. If you're sensitive around those subjects or are vegetarian/vegan, it may be a difficult topic. Additionally, food itself can be a difficult subject. As with any TTRPG, please listen to your own feelings as well as your partners as you play, take any breaks you need, and cry or laugh should those feelings bubble up.

Ensure to have in place a Safety Tool to keep the experience fun and safe. The X Card is the most famous and simple, but make sure to use whichever tool works best for you.

Being a Caltrop Core game, this game wouldn't be possible without it. It was part of the "Super Secret No-Pressure Caltrop Core Jam!", which was both super fun and lovely to see everyone quickly whip up some REALLY fun games for.

A sincere thanks goes out to TitanomachyRPG (Itch Page and Twitter) for creating the Caltrop Core, running this sneaky little Game Jam, and being a supportive voice along the way!

An additional shout out to everyone else who participated in the Game Jam along with me! Check out their games Here.

Given the extremely tight time frame for this game, I fully expect you to find some typos, awkward phrasing, and maybe even confusion in the rules. If so, please feel free to reach out to me here or on Twitter to let me know! Additionally, I fully expect to release an updated version of this sometime in January with a bit more time to edit and mull over things! Consider this a 0.8 version!

Things to come in 1.0 Version! 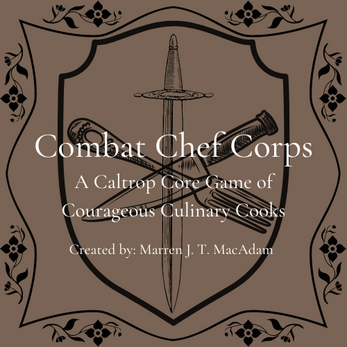