You rode to war at the call of your God, swore yourself to Their divinity as the drums of war beat from every corner of the Pantheon. Standing beside your divinity, Their purpose so clear and noble, you felt immortal. Besides your fellow Lordsworns, you felt like your victory was a certainty and battle but a trivial formality.

Now They lay dead before you, Their Godblood flowing into the dirt, Their once radiant eyes fading. Already the world lurches in distress, twisting at the loss of a God, one of many to die today. Your Captain, too, lies broken, entrusting the survivors of your Company to the Lieutenant, as the thousands you rode beside lay dying on the battlefield. You are the thirteen survivors of your Company that once numbered in the hundreds.

You have no purpose now but survival. No hope but each other. No goal but to return Home.

Welcome to LORDSWORN, a GMless game for 1-4 players, where you’ll be taking on the role of multiple Lordsworns, survivors of the Cataclysm, an apocalyptic war between the Gods. You will play out the desperate struggle of these survivors as they make their way to the only place they feel safe: Home. You will be Noble Knights and Innocent Greenhorns, Foreigner Mercenaries and Mourning Clerics. But most importantly, you will be fragile beings.

Can your group of battered and bruised soldiers face the horrors of a world ending to make it Home? Or will yours be the fate of so many others – an unmarked death and an unburied corpse alongside the road.

What's so cool about LORDSWORN?

What you'll need to play

LORDSWORN: Our Journey is only just beginning.

This version is very much a bare bones, Ashcan of the game. Within you will find no art, minimal layout, and a lot of text in need of some tender, harsh edits, clarification, and rewriting. The game is playable from this text and I would be beyond grateful to any brave soul who played it to report on how it went! However, it is quite rough and many things likely will change between this version (0.2) and the final version coming soon.

Consider this that Steam Early Access Demo you have Wishlisted for once it's become more complete, keeping you up to date with updates and changes as it progresses along. I have big plans for LORDSWORN, hoping to finish up editing and fleshing it out and commissioning some lovely art for both the cover and spot art within. Particularly, if this at all interests you, you may want to download a copy to keep up to date with news coming Early 2023 for this game...

Inspiration and touchstones: Elden Ring (Lordsworn aptly taken from the scattered, yet still loyal, undead forces of the Demi Gods), the Banner Saga, and @GeekGabs discussion on "Light Souls" over on TikTok. An obsession with, since childhood, of constantly asking and worrying about "the little guys" that always seem character/canon fodder for the Main Characters and Villians alike.

Thank yous: NaGaDeMon for giving me the hard deadline and community support that pushed this game from Idea to Ashcan in just a month! Stoneshore and Kid_Corraler for taking the time to playtest this game and provide amazing feedback.

Final shout out for the amazing (albeit temporary) logo from Levi Gilbert.

I think it would be really great if the text was divided into 2 columns instead, it will make the final print way lighter 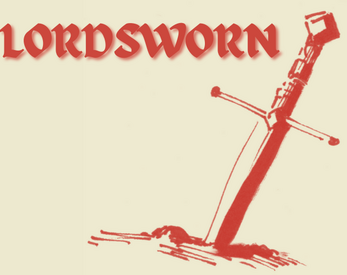